If God is a spider, I'm all set

We come home from church a few weeks ago to find that Atlas had died.

Or so it seemed.

There was, outside of his shell, a limp, still Atlas.  Katherine looked in the aquarium and screamed.

We knew that hermit crabs molted, shedding their exoskeletons occasionally, but this was not a skeleton but a whole hermit crab, intact: antennae, claws, eyes on a stick.

It appeared that Atlas had succumbed to terminal depression. Or that the Pacific seawater that we buy in a box was contaminated.

We should have been ecstatic. We were free, free, FREE from hermit-crab bondage! We no longer had to worry about whether he was eating, whether he was lonely, whether he was suffocating because we hadn’t changed the water frequently enough, whether the cats would notice there was free food for the taking in that strange glass box on the kitchen counter, whether Atlas was still angry and plotting revenge.

Oddly enough, we were crushed. It seemed a personal failing that we couldn’t keep a shrimp of a crab alive for even a year with the finest accouterments that PetCo had to offer. We’d kidnapped him, and then we’d killed him. It was a sad end to a sad life.

Doubting Thomas that I am, I departed the death scene after a few minutes, but like Mary at Lazarus’ tomb, she weepily remained there, looking for any small sign of life. And after about 20 minutes, she shrieked again.

Damned if there wasn’t a hermit crab in that empty shell.

He had molted. It was the most astonishing thing. Unlike a snake that sheds a skin that is clearly an abandoned outer layer, Atlas shrugged off a second self that was an exact replica of himself. It was as if there were twin Atlases, and one killed the other. They were indistinguishable except that one was dead and one was alive.

The now joyful Katherine went to Google and learned that, gross as it seems, hermits eat their exoskeletons, so we left the body in the tank for a week. Atlas would have none of it, so one day, I reverently lifted the remains out of the tank with a spatula and buried them in the planter on the deck. Old Atlas will fertilize spring flowers.

New Atlas seemed tired for a few days; miracles take energy when you do them yourself.

But soon he was back to clunking his way around the tank, and like marathoner Ryan Hall, he seems a little beefier these days, a little more capable of withstanding his miserable captivity until we can return him to the waters off Sullivan’s Island.

As we learned from his death and resurrection, that eventual parting won’t be without tears. 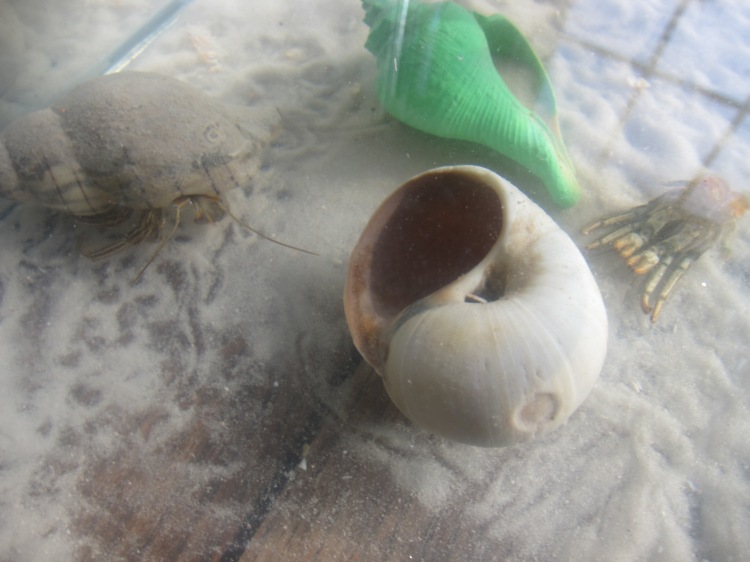 2 thoughts on “A dirge averted”